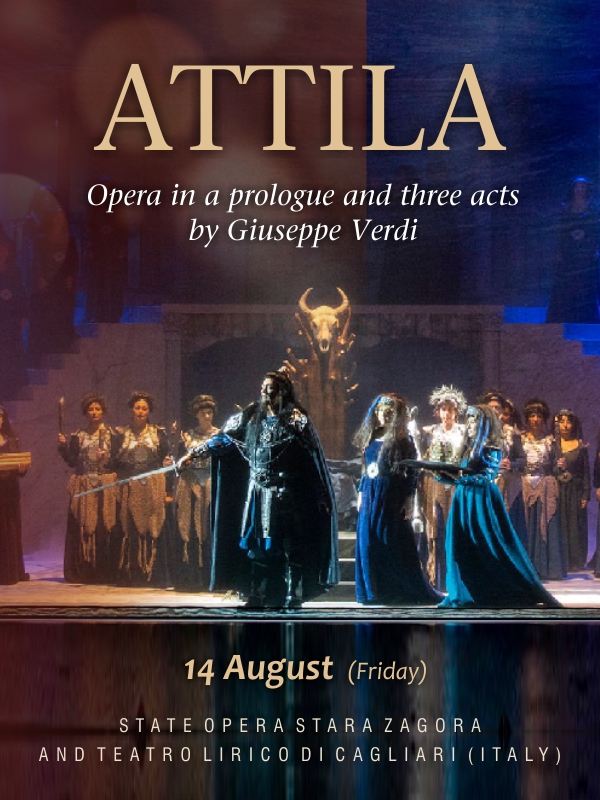 Immediately after its premiere in Stara Zagora, Giuseppe Verdi’s “Attila”, a co-production of State Opera Stara Zagora and Teatro Lirico di Cagliari (Italy) will be staged on Tsarevets Hill on 14 August at 21:00 as part of the 2020 season of Stage of the Ages Festival.
“Attila” will be the first of its kind co-production in Bulgaria, specially produced for the two partnering stages. The two partnering opera theatres has been equally involved in the preparation of this ambitious production. More than 250 new costumes, stage props, accessories and impressive set design elements were made in Stara Zagora for the spectacular performance.
This production of Attila premiered on 27 September 2019 in Cagliari (Italy) and the first performance in Stara Zagora is set for 8 August 2020 at the Antique Forum Augusta Trayana.
It is an impressive classic production of the opera, focused on authentic costumes and true representation of the ancient times. The dramatic story of this early work of Verdi, retelling the devastating conquest of Italy by the savage Attila’s Huns, with all the drama, love and betrayal, will fit perfectly the natural setting of the historic Tsarevets Fortress.
After the performance, as a special gift from Veliko Tarnovo Municipality, the audience will be able to enjoy for free the “Tsarevgrad Turnov in Sound and Light”