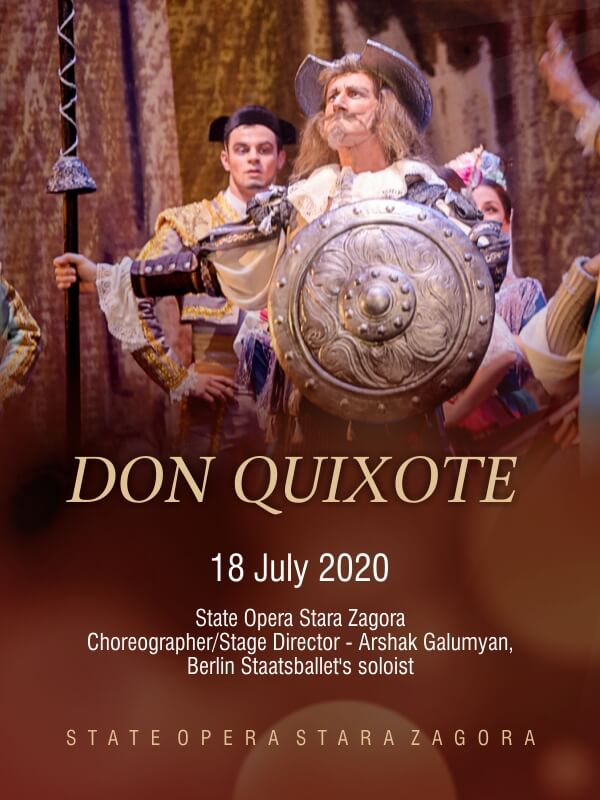 State Opera Stara Zagora opens the 5th edition of Stage of the Ages Festival 2020 on 18 July (Sat) at 21:00 with its spectacular production of Don Quixote ballet. This production of the ballet received the Golden Quill award of the Union of Bulgarian Musicians and Dancers (UBMD).

Don Quixote ballet is considered as one the pinnacles of the classic dance. This production of the Stara Zagora State Opera, directed by Arshak Galumyan, premier soloist of Berlin Staatsballet, introduces fresh choreographic solutions and original approach by enriching the visual impact through theatrical, even cinematographic means. Set and costume designer is Salvatore Russo (Italy).
The performance at Tsarevets Fortress will be specially designed for the medieval setting of the stage, flooded with the colours of Spain. We are looking forward to this magnificent performance, created within the best ballet tradition, but also beating with the pulse of the modern times.
The performance features the whole multinational ballet company of the State Opera – Stara Zagora, which during the recent season has acheieved an amazing leap in its professional growth. The achievements of this young company under the leadership of prima ballerina and ballet director Silvia Tomova are highly appreciated by professional critics, connoisseurs and spectators in all parts of Bulgaria.
A special treat for the audience will be the “Tsarevgrad Turnov in Sound and Light” show, which will be aired for free after the end of the ballet from the square in front of the fortress.