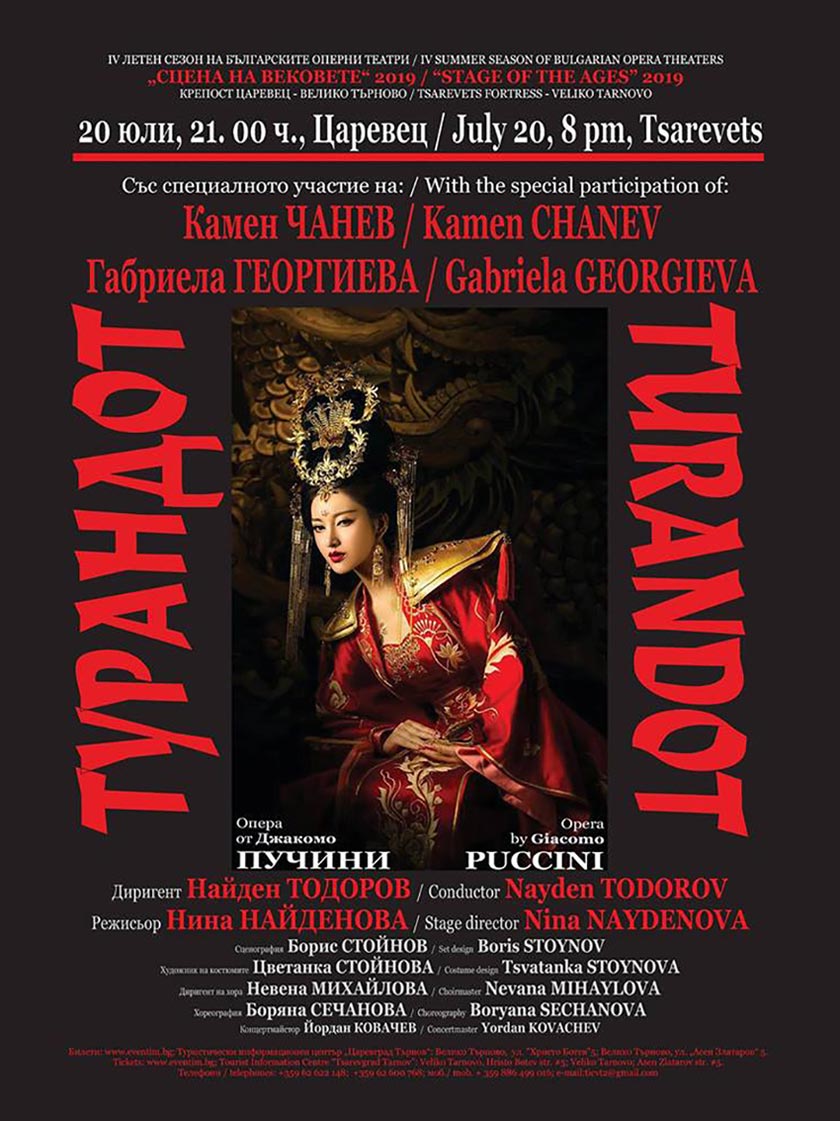 Burgas State Opera will present Giacomo Puccini’s Turandot Opera on July 20, 2019 (Saturday).
The story of Princess Turandot is drawn from the Persian short story entitled “One Thousand Days,” or “Hezar-o-yek-shab,” translated in 1722 by François Petit de La Croix. This compilation is actually the other part of the well-known Thousand and One Nights. The Turandot tale is one of the most popular of de la Croix’s translations, and the storyline? is conditioned by the classical trinity of space, time and action.
Puccini began working on Turandot in March 1920 after meeting with his librettists Giuseppe Adami and Renato Simoni. Four years later, the opera was composed to the final duet. Unhappy with his lyrics, however, Puccini stopped working until October 8, when he stopped at Adam’s fourth version of the duo’s text. Just two days later, he was diagnosed with throat cancer and the composer left for Brussels to undergo new, experimental radiation therapy. Puccini and his wife never know the severity of his illness; the real diagnosis was only revealed to their son. On November 24, 1924, Puccini died of complications resulting from a fatal illness.
Turandot is completed by Franco Alfano.
The opera premiered at the Scala in Milan on Sunday 25 April 1926 and five months after Puccini’s death. The conductor is Arturo Tuscanini. In the middle of Act III, two strokes after the “Liu, poesia!” Cue, the orchestra freezes. Tuscanini stops conducting and puts his baton on the console, then slowly turns his face to the audience and says, “This is where the opera ends, because after that the maestro dies.” The curtain is slowly falling. The audience remains in grave silence. Moments later, the exclamations of “Glory to Puccini!” Erupt, for the first time, the opera with the finale of Franco Alfano is performed on the second performance.

The production of the Burgas Opera is with the special participation of Kamen Chanev in the role of Calaf.
Conductor – Nayden Todorov
Director – Nina Naydenova
Set design – Boris Stoynov
Costume Designer – Tsvetanka Stoynova
Soloists, orchestra and choir of the State Opera – Burgas

A special gift for the audience will be the audio-visual show “Tsarevgrad Turnov-sound and light”, which will be broadcast after the end of the show.

Photos of performance
FESTIVALS IN THE YEARS